Sorry to say, this railroad is gone
Sadly, the D&L Garden Railroad is no longer, since our move in 2016. But we still enjoy the club, and run a few large scale trains indoors now. 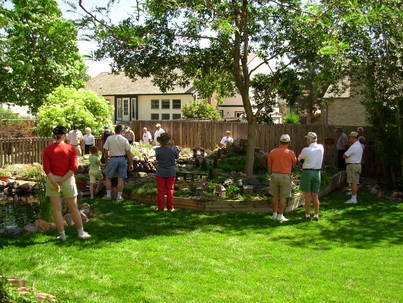 Construction started in August of 1998, and the first trains ran in April of 2000. In between, over 50 tons of dirt and 25 tons of rock were moved to the backyard via shovel and wheelbarrow. The 20' X 30' raised layout is a twisted and folded dog bone design with 150 feet of track and 3% grades up and down. A stream runs from the mountain top, down through the canyon, and into the pond. A four track 18' long train shed moves trains to and from the layout via a draw bridge. All trains run under battery power radio control designed by Del, who owns and operates www.G-Scale Graphics.net.

June 2016
The D&L Garden Railroad is no more. We moved to a patio home in Windsor, Colorado. No railroads allowed outside, but I'll be running trains indoors on table tops.

Our railroad was featured in the book "Getting Started in Garden Railroading" by Alan Miller, 2011. See it here ...